The lives of stones (updated)

Stones are as animate as any other lifeform. They vibrate at a qualitatively different frequency than much of what many people think of as animate and, under natural circumstances, may be far more long-lived.

I’ve learned about stones living on Hawai’i Island, where the land is young enough and, in many places, undeveloped enough, that stones abound. The Hawaiians of old built with stone, and the stony remains of sacred sites and villages long abandoned dot the woods, fields, and shorelines. In recent times, Kilauea volcano, on the southeast of the Island and continuously active since 1983, keeps giving birth to new land and thus, as the lava ages and degrades, many more stones. Old-time Hawaiians say that individual stones can give birth to stone babies, something I have never witnessed, cannot explain, yet do not doubt. Some also say that stones are energetic archives, holding stories and history, and people who know how to listen can access those. 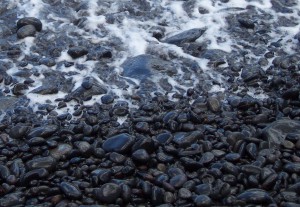 Stones often are lonely now because few humans today understand them to be alive and pay them little or no attention or, worse, attend to them for reasons that bring disrespect and harm. In some locales, the grief of stones is palpable. Yet acknowledging their presence with the touch of a hand, a kind word or two, a song or a chant, goes a long way toward mitigating that grief. Small, water-worn stones (‘ili ‘ili, pictured) used to dance and sing with hula dancers, and many are happy to be gathered, with the proper protocols, to dance and sing in this manner again.

I have a stone friend — a particular stone I’ve developed a relationship with since coming to live in Kohala in 1998 — at an old sacred site a short walk from my house. I always say hello when at the site, as I would with any friend, and touch in gently with my hands; the stone responds with one or several colors (how I perceive the response), which gives me a sense of the prevailing energies. On occasion we’ve done Earth Work together as well.

One morning recently, I went out walking early and stopped to greet my stone friend as usual. The stone felt depleted when I touched in. I’ve experienced this before in stones on land where human taking is out of balance with giving back, but it seemed far-fetched that could be the case here. I sensed grayness in my friend — not the color gray, more like a lack of color, of vitality, altogether. It occurred to me then that my friend was sick. That a stone could ail was a revelation. I imagine there’s medicine for stones but, knowing nothing about that and caught off guard, I told my friend that surely the Earth, with all her power, would revitalize him.

Because, in that moment, I understood that even stones have a lifetime, and my friend may be approaching the end of his. This made me unutterably sad. I said I’d touch in again soon to check on his status. I know I’ll feel a difference if his life-force is well and truly spent.

I felt the need for a walk this morning and visited my stone friend. As soon as I put my hands on him, I knew he was…dead. His life-force gone. He felt dense, heavy, inanimate — words used to characterize stones by people who haven’t had the pleasure of stone friends.

But the spirit of the stone was available and immediately made contact. It was much like talking with the spirit of any of the departed, any whose natural life span as we understand it has come to a close. In truth it wasn’t that different from our prior communications when his spirit and body were a coherent whole.

The stone-spirit told me he was simply no longer in his stone-body, was content being without a body, and might eventually animate another stone-body — “…much like what you humans call reincarnation.” It was clear that our relationship had subtly transformed — and that we still have a relationship. Isn’t this all we can hope for with any of our relationships: that when they grow and change, as they inevitably do, we do so right along with them?

I left feeling no loss, no sadness, whatsoever.

This entry was posted in Energy and tagged communications, interspecies relationships, land-human partnership, web of life. Bookmark the permalink.